A debate about the possibility of “breaking” the barrier of 2 hours in the marathon has been published by Joyner et al. (2011) in the Journal of Applied Physiology. The authors have expressed their opinions about the optimal runner’s physiological profile which would make it possible to achieve that result.

On the basis of an analysis of the history of marathon world records, it was shown that since the early 1950s to present time, there has been an improvement in the marathon run record by more than 16 minutes. The current world men’s record holder in marathon is Kenyan runner Dennis Kimetto (set in Belin 2014, 2:02:57), who has recently improved the record of his compatriot Patrick Macau S.A.R. (set in Berlin, 2011, 2:03:38). A significant improvement in the marathon results was observed after the positive effects of high training volumes were observed and began to be widely used in the coaching practice.

In the 1960s the African runners began to start more and more in the international marathons and as a result it had further caused the improvements of the world records. Of a high importance were the growing cash prizes for the winners of the marathons, that started to be awarded at the beginning of the 80s. The possibility of earning money had an important influence on the best marathon runners and it improved their motivation for hard training. A marathon under 2 hours

The scientists suggest that “breaking” the barrier of 2 hours in the marathon can take place over the coming 13-25 years by a runner from the East Africa country. 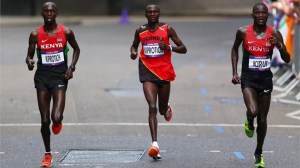 The runner who would be able to cover marathon distance (42 km 195 m) in less than 120 minutes will have to possess an optimal physiological profile typical for endurance athletes. That runner should possess a high level of VO2max, high lactate threshold running speed and excellent running economy. Current research shows that a high level of aerobic performance markers decides about the result in long-distance running.

Among the top marathoners a very high levels of VO2max are observed – ranging from 70 to 80 ml/kg/min. In addition, the top class long distance runners are able to continue running for more than 1 hour at the speed corresponding to 85-90% of their VO2max.

High running economy determines more economical use of muscle glycogen stores. In addition, lower level of heat production of metabolic origin also contributes to the reduction of thermal stress. A marathon under 2 hours

It should be noted that most African marathoners live in the areas on certain altitude (the average altitude of Africa is 657 m above sea level) and are characterised by high levels of physical activity from the early years of life. These two factors may also have an important impact on the development of high exercise capacity of African long-distance runners.

The scientists increasingly pay attention to the potential genetic factors and the possibility of their further development in the process of long term training. There is currently a limited possibility to analyse the genotype of the athletes and their individual predispositions for endurance events.

This article caused a response from the scientific community specialising in the physiological research, which was evidenced by the large number of published comments (also in the Journal of Applied Physiology) which further supplemented the overall view point presented in the article by Joyner et al. (2011).