This means that the athlete is able to continue the effort with higher intensity (or higher heart rate without the increase and accumulation of both lactate concentration [La-] and hydrogen ions [H+] (causing a lowering of pH).

In addition, the shift of lactate threshold affects the economy of effort through more economical use of muscle energy resources (especially muscle glycogen) during the entire duration of the effort. 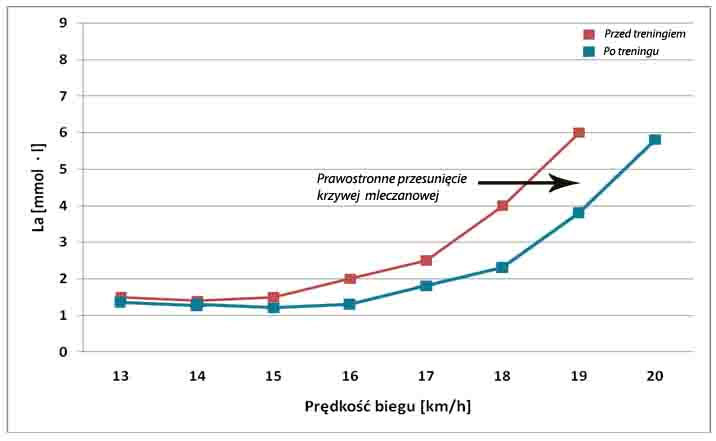 The observed phenomenon may be the result of growth in the number and size of the mitochondria and greater activity of key oxidative enzymes resulting in an increase of ATP resynthesis capacity from aerobic sources. In addition, the lactate threshold shift can also be caused by a greater ability to transport (remove) lactate out of muscle cells.

Periodic monitoring of adaptive changes that occur in athlete’s body and are caused by the training (such as the analysis of “lactate curve” shift) allows to monitor the effectiveness of the training and the current level of aerobic fitness.

Based on:
Whyte G., (editor). The Physiology of Training. Advances in Sport and Exercise Science Series. Churchill Livingstone Elsevier, 2006.